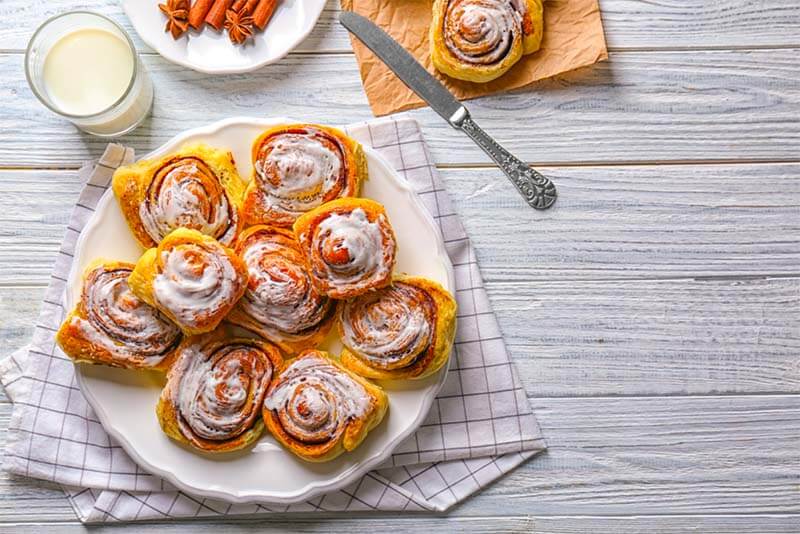 Just hearing the word “cinnamon rolls” makes my stomach growl with anticipation for these heavenly, creamy, and rich sugar rolls that are filled with cinnamon powder and butter. I mean, the idea of not literally devouring the whole pack of cinnamon rolls containing 9-12 rolls is a challenge on its own. And I am sure you feel the same way, who wouldn’t?

That’s why I am pretty positive a lot of people are faced with the dilemma of storing the leftover cinnamon rolls, particularly freezing them. Cause we can’t really always eat the whole pack, unfortunately. The point is, I made it my job to show you all the ways you can store your cinnamon rolls, in addition to, the five best ways on “How to reheat cinnamon rolls” so that you can get to enjoy them later on.

So, I have done an extensive research on the best ways of reheating the cinnamon rolls. And let me tell you, there are plenty of them. I couldn’t just blindly write them all, that’s why, I took it upon myself to try each one separately and compare them according to the outcome’s texture, effort spent, and of course taste. I managed to narrow them down to just five. All you have to do now is to just pick whatever way suits you best.

I will start first with ways to store your cinnamon rolls.

How can I store cinnamon rolls?

Storing cinnamon rolls depends on the length of time you are going to leave them for. For example, if you are willing to keep them just until the next day, then you don’t have to freeze them. All you need to do is just wrap them tightly in an air-tight container after making sure they are cool and dry enough so that moisture doesn’t render them mushy.

That’s it, they can last for 48 hours. To store them for a longer period of time then you need to essentially make sure they are dry and definitely not warm. Wrap them in a freezer bag, preferably individually with a paper towel to soak up any moisture formed, and leave them in the freezer for up to a month after removing all the excess air in the bag. But of course, you will need to the thaw the frozen rolls first before reheating them.

An easy way to remove the air from the freezer bag is by closing the whole bag except for a small hole where you will insert a straw to soak up all the air and close the bag afterward.

Refrigeration just straight up dries the cinnamon rolls. I personally don’t prefer it.

These rules don’t apply to cinnamon rolls with cream cheese icing, unfortunately. As the USDA doesn’t really encourage eating any food with no preservative containing cream cheese that was left for more than two hours without refrigerating.

Now, it’s time to explain all the best ways where you can heat up the cinnamon rolls:

It could be due to numerous variables, ranging from the size of the glass to the amount of water added. Point is, using just a simple damp paper towel to cover the cinnamon roll is perfect.

How can I reheat cinnamon rolls in the microwave?

Anything reheated using the microwave is guaranteed to be done quickly and effortlessly. These are exactly the advantages of reheating our delicious cinnamon rolls using the microwave. However, the cinnamon rolls stay fresh for only a few minutes before they start drying and crisp up losing their tender and moist texture. So unless you are going to finish up the whole thing immediately after taking it out of the microwave, then I recommend you the oven method.

I always prefer using an oven when I reheat anything not just cinnamon rolls, consequently, this became my preferred method when it comes to the delicious cinnamon rolls. However, I do understand why some people might not share the same opinion as me, and I am going to state why in the end.

How can I reheat cinnamon rolls in the oven?

I already stated how much I love using the oven. It doesn’t only allow me to reheat my cinnamon roll in batches, but it also results in a soft and creamy cinnamon roll that is the closest result to the freshly made one. But of course, there is a downside to this method, which is the fact that it is time-consuming in comparison to the other methods. Waiting for the oven to reheat and for the actual rolls to be ready requires some patience. Trust me. The outcome is worth the wait really. 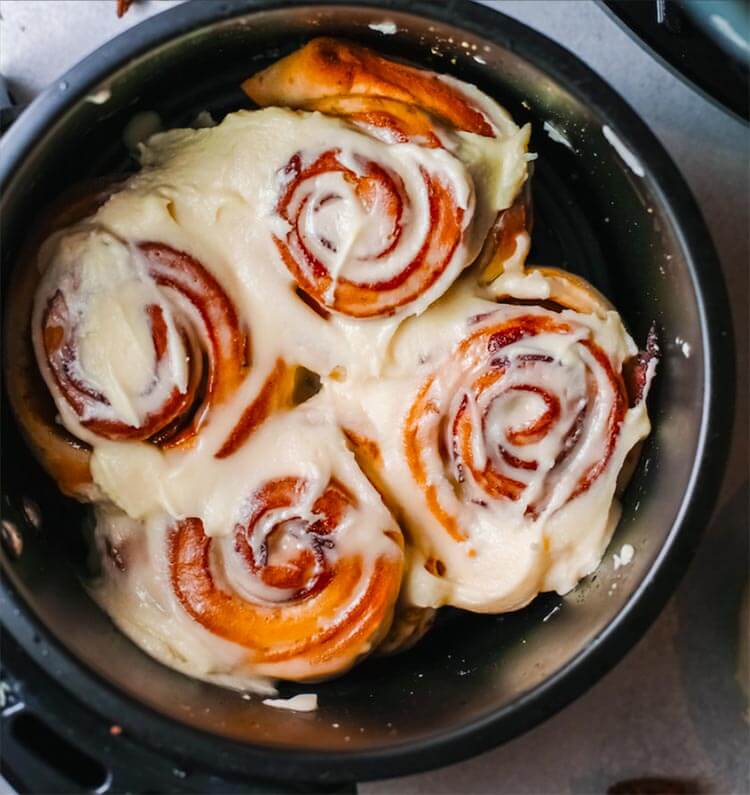 I figured I should give this one a go. I mean, what’s the worst that could happen right?

How can I reheat cinnamon rolls in an Air fryer?

Well, from my previous recipe you would know how much I adore using an air fryer in any and everything. It is easy, convenient, and can do pretty much anything. Unfortunately, not this time. I am saying this with a heavy heart, it failed me this time. Sure, it is fast and easy, yet the outcome is kind of disappointing. The rolls somehow dried out when I used the air fryer. So yea, I am not happy.

This method isn’t exclusive to using just this type of grill, in fact, you can use any type you prefer, ranging from sandwich toasters to any Panini press type.
It is better not to ice your cinnamon rolls before adding them to the grill so that they won’t harden and lose their flavor.

How can I reheat my cinnamon rolls using a George Foreman grill?

My least favorite method for sure. It was random really, so I figured why not just try it. But, no, honestly, I didn’t like the outcome at all. Definitely prefer to stick with any of the previous ones.

Can I reheat Cinnabon cinnamon rolls?

Yes, of course you can. Believe it or not, the best method of actually reheating readymade Cinnabon cinnamon rolls is using the microwave!

All you got to do is just place the rolls after thawing on a microwavable plate and transfer them in the microwave for 15-20 seconds. That’s it. Additional rolls added require an extra 4-6 seconds.

Can I reheat Pillsbury cinnamon rolls?

Again, of course you can. Also in the microwave, following the same exact method as the Cinnabon one. But, it will require some extra time in the microwave. 20-25 seconds, with an extra 6-8 seconds for any extra rolls.

Finally, I am going to share with you the recipe to the best way with its ingredients that you can follow to reheat your delicious leftover cinnamon rolls.

Some tips to prevent your cinnamon rolls from drying out and keep them fresh: 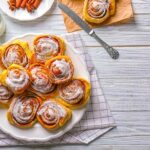 The Best Guide for How to Reheat a Sandwich!

How to defrost pizza dough

How to Reheat Chicken Parm