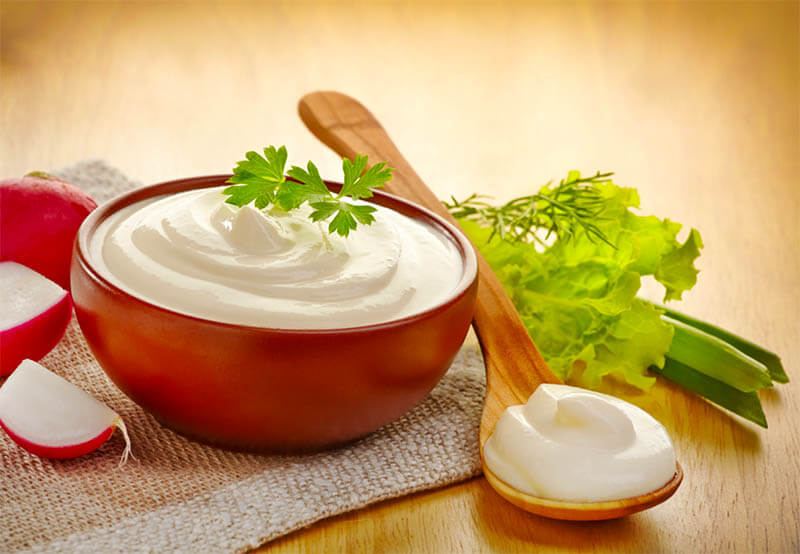 I am often bombarded with many questions regarding the uses of sour cream in different foods, specifically the question of ‘Can you heat up Sour cream?’
The answer would be yes. And to answer the second most frequent question asked ‘Can you microwave sour cream?’ I will also say yes to that!

I know it might be frowned upon by many people the idea of warming up sour cream in the microwave of all things, but trust me it is actually very practical when it comes to leftover food that contains sour cream that can’t usually be separated. All you need to do is to just follow the following detailed steps to avoid the separation of the sour cream and its curdling.
One more thing people fear when they think about microwaving their leftover sour cream. The leaching of the container into the cream while it is warming up. That’s why it is important to know exactly how to handle the leftover meal made with sour cream.

Let me first give you a brief about sour cream.

What is sour cream exactly?

Sour cream is this delicious and creamy cream cheese-like, yet with a tangy and sour flavor. It is produced by the fermentation of the dairy cream by lactic acid bacteria.

What Varieties Of Sour Cream Are Available?

It is like a general statement by the U.S food and drug administration that any product must contain at least 18% milk fat to be labeled as sour cream. Knowing that, you should also know that the percentage of milk fat affects the variety of the sour cream, it could be any of those according to milk fat percentage:

Reduced fat cream contains a lower percentage of milk fat than the ‘full fat’ by about 25%, while the fat-free doesn’t have more than 0.5 grams of milk fat.

The non-dairy sour cream is made up of different ingredients than that of the authentic sour cream, that’s why we are not going to dig deep into it in this article.

Is it ok to eat heated up sour cream?

There are a few things that you need to know about dairy products in general before you attempt to reheat sour cream. When it comes to sour cream, its spoilage is not always linked with rotten odor, bad look, or unpleasant taste. In fact, bacteria could thrive on it and potentially cause food poisoning and you wouldn’t know prior to consuming it. But don’t worry, the USDA has already established a few guidelines regarding daily products, especially sour cream to avoid any chance of food intoxication:

Refrigeration can In fact allow the sour cream to be stored for up to 2 weeks.

Things you need to know before microwaving sour cream:

You will most certainly be exposed to at least one leftover dish that has sour cream in it and needs reheating, in your life. That’s why you need to properly learn how to handle the warming up of a meal containing sour cream.

Here are things you need to know before microwaving sour cream in your next meal prep:

These are all general tips that you should keep in your mind when you are warming up any leftovers that contain sour cream. However, it really depends on the dish itself and the type of sour cream added that eventually determines the outcome.

How to heat sour cream in the microwave?

Since some of the most enjoyed meals like garlic marinated chicken breasts, gravy sauce, or even dipping sauce require sour cream as one of their main ingredients, you will most probably need to warm up your sour cream. That’s why you should know exactly how to do so in the microwave.

It is always better to just place a couple of tablespoons of the sour cream in a microwavable or a ceramic bowl and also, heat the sour cream in batches so that it is easier for you to set a definite time and avoid overheating which will ultimately cause the cream to separate and curdle.

Another tip that you should consider when you are using the microwave to warm up sour cream, is to set the microwave to medium heat and allow each one tablespoon of sour cream to heat for 15 seconds with continuous checking and stirring of the contents of the bowl every 5 seconds.

Bear in your mind that different types of sour cream require different heating times so it is always safer to set a medium heat with the smallest time intervals to eliminate the chance of sour cream curdling. Also, you will need to be extra cautious with non-fat sour cream, as they have the highest tendency to separate when exposed to heat.

What you should never do is heat the sour cream in its original container using the microwave!

What happens when you heat sour cream in its container?

Don’t ever attempt to microwave your sour cream while it is still in its original container. I know it might seem too tedious to transfer your leftover sour cream into another plate just to warm it up, but knowing that it is certainly more healthy to do so should ease it up for you a bit. That’s because the original sour cream containers weren’t made to be microwaved, hence the idea that they might actually leach chemicals into your sour cream when they are subjected to heat while microwaving!

Can you heat up a burrito with sour cream?

Reheating leftovers that have sour cream in them is generally possible. However, the amount of the sour cream and the food itself really affect the outcome of the warmed up food. It is always better to just separate the sour cream from whatever food it is added on to avoid turning it into one big mush, but since that’s not always possible, some food can simply be reheated with it. For example, the burritos containing sour cream can be warmed up with and without the sour cream. While baked potatoes are better warmed up with the least amount of sour cream.

Can you heat up a baked potato with sour cream?

Yes, of course, you can. But, not directly, as you will need to remove as much of the sour cream as you can to prevent your baked potatoes from turning into a soggy mess!
All you need to do is just scrape off all the sour cream you can from the baked potatoes into a bowl, reheat the potatoes, then add them back on top.

How to Reheat Chicken Fried Steak in 6 Sizzling Ways

Can You Reheat Popcorn? – The Ultimate Guide