A fresh new day with fresh new and different ideas on how to reheat one of the closest dishes to my heart, stuffed peppers!
Stuffed peppers are the perfect winter meal that just spreads warmness in my chest, with its melted cheese on top of the flavorful ground beef and vegetables, during the coldest of days. It is fairly agreeable that chances of you needing to reheat some leftover stuffed peppers are pretty high.

And that’s because these delicious heavenly stuffed bombs are usually intentionally made to fill a whole pot so that they could cook equally and perfectly, which usually poses the problem of ‘Leftovers’.

Rest assured though. Starting from today, you won’t need to feel guilty again when you make this amazing dish, as I am going to share with you How to reheat stuffed peppers in four different ways, with all the detailed steps so that you will choose whichever way most convenient for you to follow. Don’t worry about the outcome, it is simply perfect, if not better than the original! 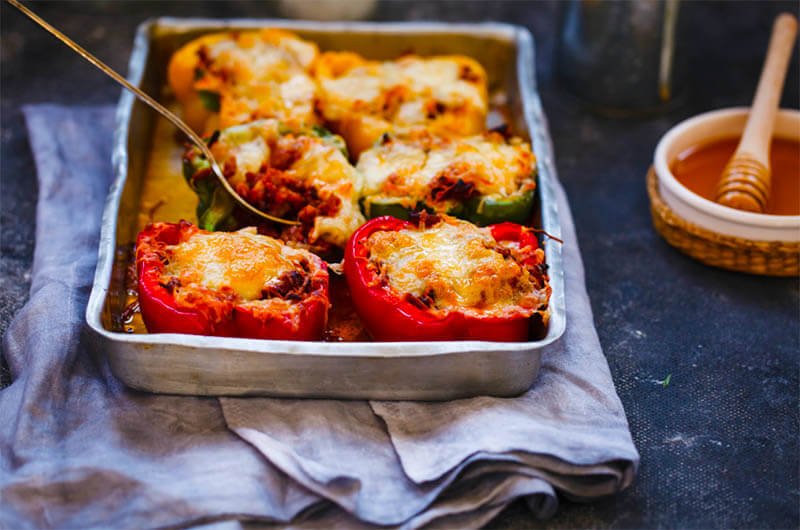 I figured why not start this article with what I think to be the best way of reheating stuffed peppers. I mean, the oven method is generally one of the best ways to reheat anything. It usually retains the quality of the food and ensures its slight crispiness.

Especially here, it doesn’t turn the stuffed peppers into a soggy mess like some of the other methods. Plus the fact that you don’t need to thaw the frozen pepper when using this method. This is important for me to be honest. It will probably take more time in the oven, but still better than waiting for the frozen ones to thaw.

How to reheat stuffed peppers in the oven?

It is important for the oven to preheat first before putting the dish filled with stuffed peppers inside so that they could efficiently reheat. This temperature is perfect in case of warming up the stuffed pepper, it won’t burn the edges without the center being warm enough.

Second step: Align the stuffed peppers on a baking tray or any oven-proof dish and cover them.

This is an important step that guarantees the final outcome. That’s because if stuffed peppers are not aligned with their stuffing facing upwards, they could leak their juices and dry out. Also, covering the whole tray ensures the heat reaching them equally and for them to retain their delicious juices inside. Final tip, don’t arrange them on top of each other, to make sure they are all equally exposed to the heat.

Third step: Warm up for 15 minutes in case of fresh and 45 minutes if frozen.

Transfer your baking tray to the oven and give it time according to the condition of the stuffed peppers. If they are not frozen, then 15 minutes should be enough time, while if you just took them out of the freezer, then they would require a bit more time. And you can check them from the center whether they are warm enough or not.

Fourth step: Uncover the tray and leave it in the oven for extra 5 minutes.

This step is good as a final touch to your warmed-up dish. The extra 5 minutes without any cover will allow the peppers to crisp up a bit and for the extra moisture to evaporate.

Serve up your delicious stuffed bell peppers after making sure they are hot enough from their center and enjoy!

The instant pot might seem a bit complicated in its settings as it has so many different ones. But, don’t worry. I am going to break down to you how you can use each and every one of the three best settings suitable for our stuffed peppers.
You can warm up either frozen or chilled stuffed peppers using the instant pot!

Both the “keep warm” and “slow cook” settings resemble that of the oven, that’s why they usually take a longer time than the “steam” settings. They are also perfect for frozen or unfrozen stuffed peppers.

This method is the complete opposite of the oven method. It is faster, yet results in a more mushy and moisty stuffed pepper, which is not exactly perfect, but it serves you well if you are in a hurry. Another downside is the fact that any frozen dish needs to be either defrosted first before they go in the microwave, or to be put in the microwave on “Defrost” settings before warming them up.

But the outcome is not bad, plus you get to reheat a small batch without the need to first preheat your large open and waste time and expenses.

How to reheat stuffed peppers using the microwave?

First step: Arrange the stuffed peppers on a microwavable plate.

Make sure to align the stuffed peppers on one layer with their stuffing facing upwards.

Adjust the settings on “High” and leave the microwavable dish containing the stuffed peppers for two minutes.

Third step:  Check whether they warmed up enough or not.

In case the stuffed peppers are not hot enough yet after checking them from the center, then transfer them back to the microwave at 15 seconds intervals. Don’t leave them for a long time so that they won’t overcook.

Serve them into plates straight from the microwave, or better yet, just microwave the plates separately and eat immediately. 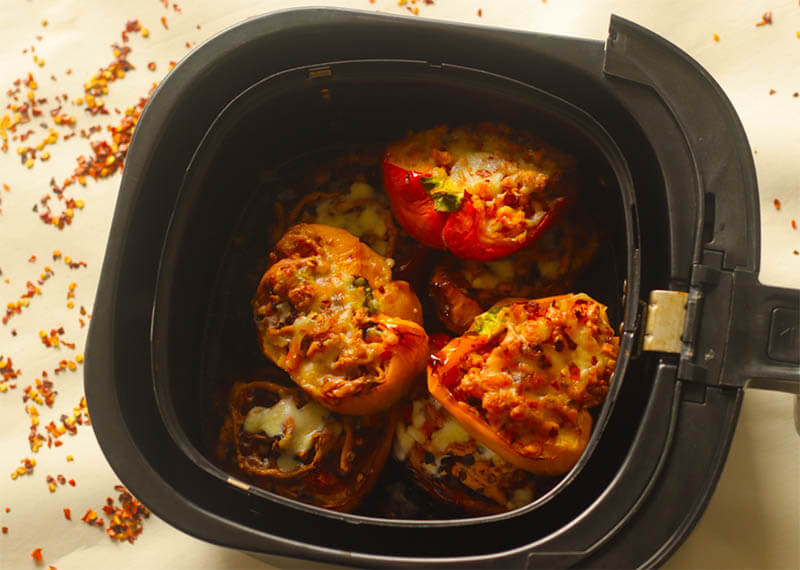 The air fryer as always saves the day. It is kind of a mix of both worlds. It is faster than the oven, yet retains the texture of the stuffed peppers just like the oven. Also, you get to warm up the frozen peppers without defrosting them first. How cool is that?

How to reheat stuffed peppers using the Air fryer?

Start by first spraying some oil on the tray then arrange your stuffed bell peppers on the Air fryer tray making sure not to over stack them on top of each other. It is important to know how the air fryer works for you to understand why you need to make sure the peppers don’t fall over and not to be sticking to each other. That’s because the hot air needs to circulate around every inch of the food to make them warm and crispy.

Second step: Leave the peppers in the air fryer to reheat.

Transfer the tray containing the stuffed peppers into the air fryer after preheating it at 350F for 4-5 minutes. Chilled peppers don’t require more time than five minutes in the preheated Air fryer, while frozen ones could take up to 15 minutes and more according to their condition.

Once the stuffed peppers are hot enough, serve them immediately into plates after checking their center. Enjoy!

These are all the questions related to the different ways of reheating the stuffed peppers that people asked me.

How to prevent stuffed peppers from becoming soggy?

It all depends on how you stored or froze them in the first place. You need to make sure the leftover peppers are not hot anymore, but rather cold. That’s why it is best to let them cool at room temperature before moving them to the fridge to chill for 3-4 hours and then transfer them to the freezer to freeze.

Another thing is how you reheat them. Like we mentioned before, both the oven and Air fryer methods keep the peppers somehow dry and not soggy, unlike the microwave method which always results in a soggy mess.

Replacing rice with quinoa in the stuffing can make a big difference in the moisture content of the peppers, as they tend to soak up the extra moisture in the stuffing, allowing them to warm up nicely. Adding oats in the filling also has a similar result.

Can stuffed peppers’ leftovers be frozen?

Of course, it can, in fact, it is pretty simple. After making sure they are completely cool and chilling them for a few hours in the fridge. Place them in a freezer container or you can just wrap them tightly in a freezer bag. That’s it. You can forget about them for the next 6 months.

How can I store leftover stuffed peppers in a fridge?

It is as simple as the freezer method. However, they can only last for 4 days in the fridge, and 24 hours if they contain rice.
All you need to do is to cover tightly the closed container containing the cooled stuffed peppers leftovers with aluminum foil and leave it in the fridge.

Extra tips to facilitate the storing and reheating of the stuffed peppers:

Now that you know everything you need about all the different and effective ways of both storing and reheating your stuffed peppers, you won’t need any more motive to start making this delicious dish in bulk and storing them for whenever you crave them, and it will still taste amazing!