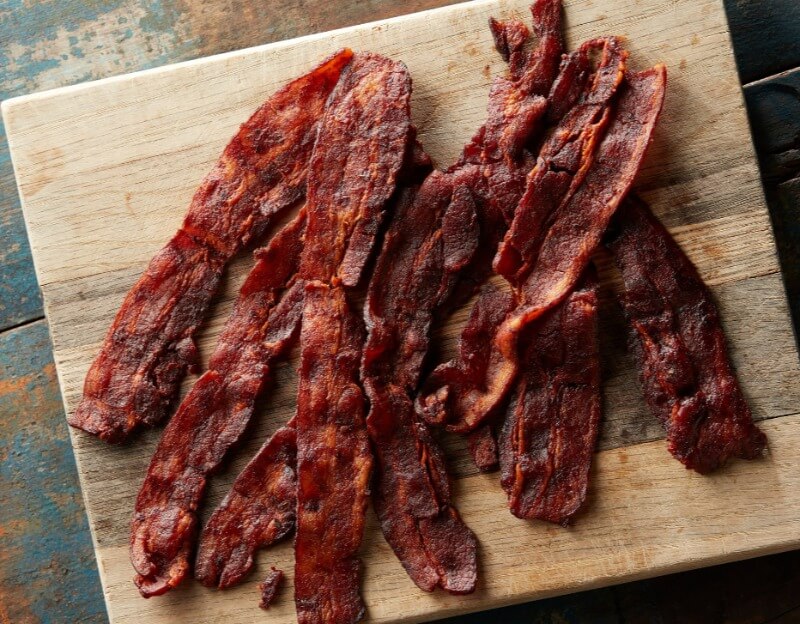 My hunger along with my excitement level sky rockets whenever I hear anything bacon-related, especially bacon jerky. I mean, it is my absolute favorite form of bacon.

If we are comparing the cost of homemade jerky and that of the store-bought. The major factors that affect the cost of the meat purchased are water content, fat content, type of meat, quantity purchased and retailer purchased.

On the other hand, making your own bacon jerky gives you the advantage of knowing what you are adding and controlling the ingredients, as well as, the quality and freshness of your jerky bacon.

What is exactly a bacon jerky?

Bacon jerky can always be mixed with beef jerky. They are both so close to each other. However, beef jerky is made by trimming off the beef fat, hence the name lean-trimmed meat cut. It is usually cut into thin strips. While bacon jerky is made by drying the pork strips, with its fats, as a way to prevent its spoilage.

Fat is cut of the beef jerky because it doesn’t cure well. Unlike bacon jerky, which gives the bacon its authentic taste.

Both types of meat can be cooked in an oven, on a smoker, or dehydrated to remove moisture and prolong their shelf life.

It is, like I mentioned before, bacon. So at the end of the day, it has the same salt and savory flavor as the real bacon!

No matter what you add to it, it will still have the authentic fatty bacon flavor accompanied by the crispy and chewy texture.

Which type of bacon is more suitable for jerky?

Both are suitable for bacon jerky. It really depends on your personal preference for the end result. If you like crispy, flavorful slices, then you should go for regular bacon. While if you like beef jerky, then a thick cut will give you the satisfying chewy texture of the beef jerky, along with the taste of the regular bacon.

You can also go for lardons, which are small matchstick pieces of bacon that result into an exceptional, addictive, and perfect snack when smoked.

How to make bacon jerky?

Bacon jerky is easy and fun to make, especially using a smoker. However, it does take time to be fully done. Usually preparing the meat for bacon jerky is not time consuming. About 15 to 20 minutes, while if you are going to marinade it, then give it some extra time.

I love using my home smoker to make bacon jerky. But, you can totally make it using other equipment like a regular oven or even a dehydrator!

I am going to provide you with different bacon jerky recipes at the end of this article. These are just the general steps you will follow with any of these recipes.

Separate your bacon jerky strips from each other. Mix the dry ingredients of the basic bacon jerky recipe in a bowel. Dry rub each strip of bacon with the mix of spices. I prefer a simple mix of coarse black pepper, dark brown sugar, garlic powder, and a pinch of salt. You can cut the bacon in half to have a large number of bacon jerky.

Put each bacon strip on the baking rack after lining it with a cookie sheet. Brush your bacon strips with chili sauce and a little maple syrup or honey for the hot and sweet taste. Leave the baking sheet in the fridge until your smoker is ready.

Prepare your smoker by placing your charcoal at the back of the smoker, along with the wood. While putting the bacon in the front right in front of your eyes. This is so important for you so that you can monitor the doneness of your bacon. Remember, we don’t want to cook it. We just want to smoke it.

The thicker the bacon strips, the longer it is going to take. However, generally, we want to keep the bacon for 2 to 3 hours at a fixed temperature of 190-200 degrees. We want the internal temperature of the meat to reach 165 degrees for it to be safe for consumption.

Time to use the oven or the food dehydrator to complete the drying of the bacon. Adjust the temperature of the oven to the lowest settings. 200 degrees is fine.

While if you are using a dehydrator, then 160 – 190 degrees is perfect. Place the cookie sheet with the bacon slices in the oven or the dehydrator to dry completely. This is essential for a perfect bacon jerky, as the longer the bacon jerky stays in the smoker, the more smoky taste will be gained, which is not favored in case of bacon jerky.

Remove all the excess fat by patting the bacon dry with paper towels.

Allow your bacon strips to dry in the oven or the dehydrator for 2 to 3 hours, while making sure all the excess grease is removed every hour.

Knowing when your bacon jerky is done is a bit hard if you are not an expert in the whole drying process. However, checking the texture is one of the basic ways of knowing whether it is undercooked or overcooked.

That is done by shaking the piece of bacon jerky between your two fingers and seeing whether it is moving, that means it is still moist and not fully done, or whether it holds its shape, which could mean it is either overdone or perfectly done. Better to check it at 45-minute intervals.

Once you are sure the bacon jerky is done. Remove it from the oven or the dehydrator and place it on top of a plate covered with clean paper towels.

Try to remove the extra grease on top using another set of paper towels.

Allow them to cool.

Enjoy your dehydrated bacon within the first few days after smoking it.

You can also store it for later in a plastic ziplock bag, food-safe containers, or vacuum bags using a vacuum sealer. You can also refrigerate them or even freeze them for later.

Follow the same preparation steps as using a smoker.

Place the cookie sheet with the thinly sliced bacon in a preheated oven at 170 – 200 degrees for 3 – 8 hours, depending on the thickness of your bacon strips.

Start checking the doneness using the same doneness test mentioned before after the passage of 2 hours. Repeat at 1-hour intervals.

Follow the same steps mentioned before after placing your bacon in the oven to dry.

It is even simpler than the other two appliances.

How to store the bacon jerky for future use?

The most important thing you need to keep in mind when you are planning to store your bacon jerky is to eliminate as much of the moisture content and the surrounding moisture as you can, along with the released grease.

Keep it inside an airtight container or vacuum sealed bag in a cool dark place. Placing it in the fridge will also guarantee a prolonged shelf life as it doesn’t promote bacterial growth.

Can bacon jerky be frozen?

Generally speaking, it can be frozen. However, not many people like the texture of the bacon after freezing. So, I recommend testing it out using a small amount of bacon jerky and seeing whether it is acceptable for you or not.

Refrigerating allows bacon jerky to last for about 4 months or longer vs only 1 to 2 months if kept in your pantry.

Here are a couple of questions that I came across when I was searching for the topic. Thought I would share them with you guys.

Both are almost the same. However, bacon jerky takes longer to cook and has a more chewy texture than candied bacon.

Do I have to refrigerate candied bacon and bacon jerky?

Yes. It is highly recommended, as the bacon doesn’t last long if kept without refrigeration.

How To Dehydrate Blackberry Fruit!

How to Dehydrate Cucumbers Chips?

How To Dehydrating Habaneros Peppers?