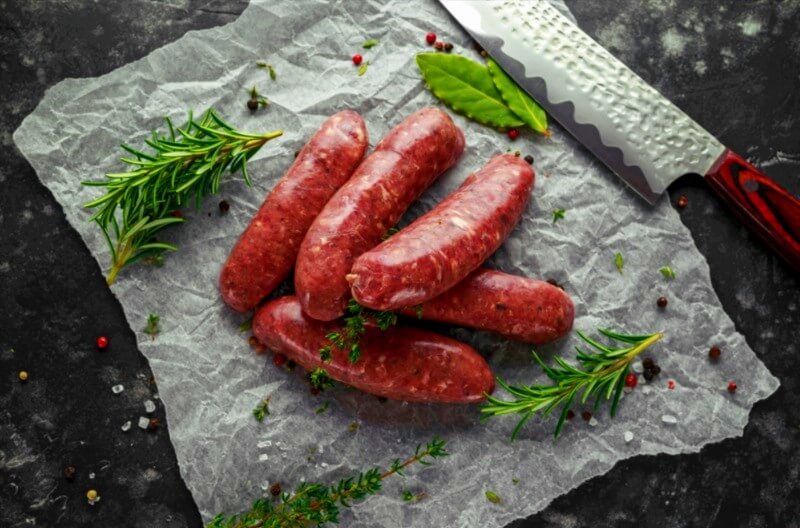 I come bearing all the good news.
Yes. You can, in fact, freeze raw sausages. And not just raw sausages, but also, cooked ones. You can freeze whatever type of sausages you have from the cheapest store-bought type, up to the fanciest and meat-est ones from any local butcher. As long as they are within their use-by date.

Contents show
Can you freeze uncooked sausage balls?
How to freeze raw sausages:
How long do raw sausages last in the freezer?
How to defrost frozen sausages
How to cook sausages from frozen
Related Articles:

Now I know how essential sausages are, especially when cooked for weeknight dinners. Nothing is easier or more fulfilling than some spicy sausage casserole. I get that the idea of having any leftover sausages might sound ridiculous. Let’s not kid ourselves. It is too delicious not to finish the whole plate at once. However, since it is almost a regular English dish, you might prefer to buy sausages in bulk and freeze them for later.

Can you freeze uncooked sausage balls?

Yes. You certainly can. I recommend following the flash freezing method when it comes to sausage balls. I am going to share with you the easy step-by-step guide you are going to follow.

How to freeze raw sausages:

Before you follow the following steps, know that you can either freeze the bought sausages as they are or you can remove them from their packaging and flash freeze them, so that it’s easier to later on defrost them.

You are free to immediately freeze the sausages once bought without first flash freezing them. However, I do prefer this method more as it allows the sausages to freeze and defrost more easily rather than taking longer time while being frozen in a big lump form.

How long do raw sausages last in the freezer?

To guarantee the highest quality, I would give sausages from one month to two. Bear in mind, though, they can last for more than two or three months and still be safe to eat. However, they won’t retain the same texture and flavor as freshly bought ones.

Frozen sausages at 0°F can last a lifetime without being spoilt.

How to defrost frozen sausages

Just transfer the sausages from the freezer to the fridge and leave them slowly defrost overnight on the top shelf. This might seem like a lengthy process, but it really isn’t if you already flash-froze the sausages. Also, know that it really depends on how you are planning to cook the sausages. You might not need to defrost them at all.

A much quicker alternative is to thaw the sausages inside the microwave after adjusting the settings to “Defrost” which shouldn’t take that long.

How to cook sausages from frozen

If you chose to allow them to thaw prior to cooking them, then you can cook them however you would prefer. But, if you want to skip the defrosting step, then I would recommend using the Air fryer or deep frying them.

Can You Freeze Gorgonzola Cheese?

Can You Freeze Creamed Leeks?

Can You Freeze Cooked Cabbage Soup?