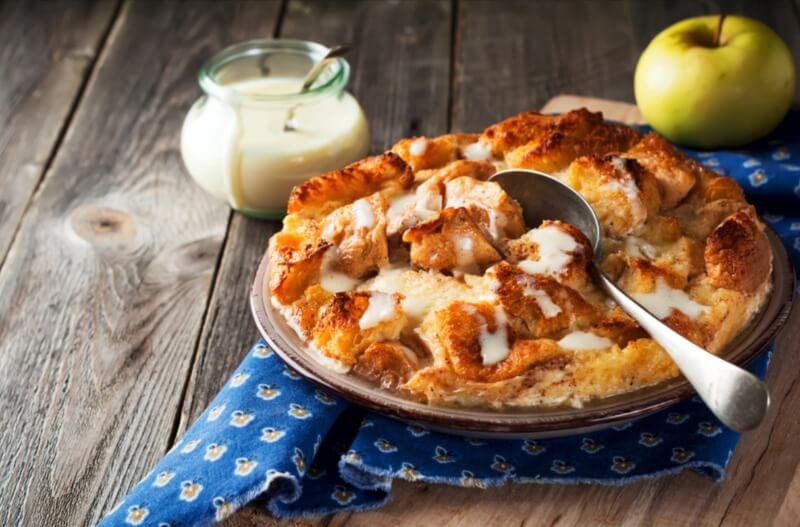 It is my secret weapon whenever I am in a rush or want something sweet but have no energy to make something fancy. I just get the frozen stale bread that I had before off the freezer and proceed with my pudding. Easy peasy.

The budding sauce can already stay for longer time, even in the fridge without being spoiled because of its high sugar content.

What is bread pudding?

It’s the easiest dessert you could ever think of, which perfectly uses up any type of stale bread you have at home. You could make it with bananas, like in the Philippines, or with maple syrup, like in Canada. Every alternative to the bread pudding is amazing and delicious!

Is bread pudding different to bread and butter pudding?

Although there aren’t any MAJOR differences between both bread pudding and bread and butter pudding, yet, it is worth to mention that bread pudding can be both sweet and savory, in which it can be made from brown or white bread with the addition of suet.

Unlike the bread and butter pudding, which is almost always sweet, made of white bread, milk, sugar, eggs, and dried fruit.

Syrups used in bread buddings in addition to sugar. Rum or caramel can be used as toppings.

How to freeze bread pudding

Before you rush in and freeze your freshly baked bread pudding, make sure they are cool first before putting them in the freezer. I prefer to freeze the bread separate from the sauce.

However, you can totally freeze bread pudding as a whole. Just divide the whole dish into portions so that it is easier for you to later defrost each portion separately.

How long can bread pudding last in the freezer?

Bread pudding can last in the freezer for up to 3 months, maintaining its optimum quality. It is still safe to eat after 3 months. However, don’t expect it to taste as amazing as before freezing.

How to defrost bread pudding

But, you do have another option to successfully defrost your frozen bread pudding quicker than the fridge method. Just leave them to thaw on the countertop. If they didn’t fully defrost after four hours, then you should transfer them to the fridge until needed.

The larger the portion of bread pudding you want to defrost, the longer it will take.

How to reheat bread pudding

You have two ways when it comes to reheating bread pudding. Either place the defrosted bread pudding in the oven or use the microwave to reheat it.

The microwave method is the quickest one to reheat your bread pudding. You won’t need to do anything except, place the bread pudding in the microwave for about 45 seconds after setting its temperature on “High”.

I do prefer reheating my bread pudding in the oven though. It thoroughly heats the pudding to its core, ensuring a piping hot dish through and through.

Just place the bread pudding in an oven-safe dish inside the oven set at gas mark 3 (160 degrees C) for half an hour after covering the dish with tinfoil to avoid the drying of the top of the dish.

Can You Freeze Black Pudding?

Can You Freeze Baileys Irish Cream?

Can You Freeze Raw Sweet Potatoes?