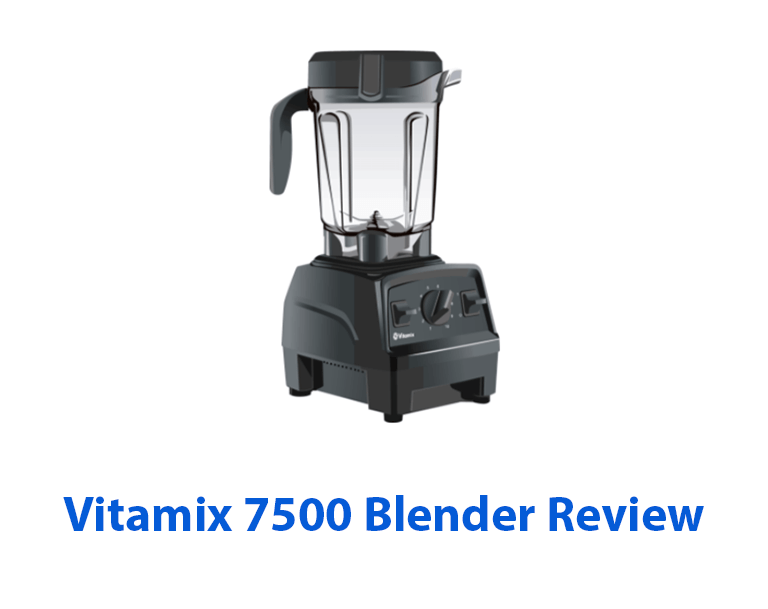 There’s one thing every fitness YouTuber/influencer has in common – they all own one heck of a powerful blender. Watching them whip up delicious smoothies and protein shakes, you just can’t help making one for yourself, right?

But when your sorry blender can’t even break down some veggies for a sauce, you know you’re in dire need of one of those powerful bad boys.

The Vitamix 7500 appears on top of the list of powerful blenders available, so in this post, we’ll review every aspect of it. We’ll talk about its features, how well it performs in the kitchen, and why or why not you should invest in it.

So before you make a purchase, do read through our detailed review below!

Vitamix the Company – an Overview

Whenever someone talks about blenders, Vitamix is a name that is sure to pop up. The family-owned company specializes in durable, extra-powerful blenders, which are also used commercially nationwide.

It was initiated by a man named William Grover Barnard, who realized during the 1920s and 1930s how valuable of a commodity a kitchen blender could become.

Over the next couple of decades, different models of the blenders were released, which, to no one’s surprise, were a huge hit.

Homes and restaurants alike were loving the industrial-strength, extra durable blenders. They could blend soups, smoothies, do some dough kneading, grind seeds and pulses, and whatnot.

In 1969, Bill Barnard rebranded the company into what’s known as Vitamix today. Recognized by top magazines like The New York Times, Vitamix is one name you can trust, as millions of home cooks and food businesses swear by its performance.

Features of the Vitamix 7500 – a Beast of a Blender 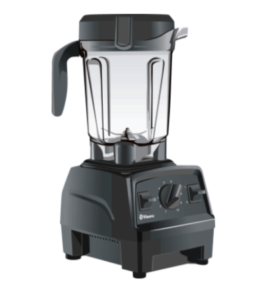 The Vitamix 7500 blender is perfect for aspiring chefs and passionate home cooks who try out new recipes every day. Here’s a detailed review of its features:

The Vitamix 7500 is the Hulk of all blenders. Seriously. It’s crazy powerful! With a horsepower of 2.2, the 1440 watt motor can spin its blades at 37000 rpm (revolutions per minute). Such power can blend almost anything you throw into the blender within a blink of an eye.

On top of that, it has stainless steel blades that are laser-cut to be super sharp (so be very careful when washing the container!). Measuring 4 inches in diameter, these bad boys can slice through the toughest of ingredients as if they were butter.

In fact, unlike most blenders, the Vitamix 7500 blender can puree leafy greens with unbelievable precision, leaving no bits of unblended leaves in your shake. That’s how you know you’ve hit the jackpot with the Vitamix blender 7500 and its 2.2 HP motor.

This may or may not be appealing to you, but the Vitamix 7500 comes with 10 variable speeds on the speed dial.

For those who like to blend more than just smoothies and shakes, these speeds can come in super handy.

For instance, you can use the highest speeds for making hot soups (yep, your soup literally gets hot due to the fast speed) and the slower ones for salsa and chunky sauces.

But of course, not everyone likes to spare a few seconds to think about what speed is best for what food.

Plus, what’s rather disappointing is that there aren’t any timers or presets on this thing. In a busy kitchen, preset settings can be very helpful, so you don’t have to stand there and wait to push the stop button.

On the flip side, it does offer a pulse toggle. It’s a nifty feature that allows you to chop up stuff coarsely without over blending.

One of the best things about the Vitamix blender 7500 is its low-profile 64-ounce container. You can fit it in small cabinets for easy storage, even in the smallest of kitchens.

While the huge capacity is appreciated, other Vitamix models come with a 13.4-inch tall container, which is annoying for many consumers.

Hence, the 7500’s pitcher is 10.1 inches tall but offers the same 64 oz container capacity by being wider than usual. So, you can rest assured that you will only need to use the blender once and have enough margaritas to last the entire night.

Apart from this, the pitcher has rounded edges at the bottom, which prevents stuff from getting stuck down there. This also makes it easier to spoon out stuff from its depths.

Moreover, it’s quite easy to clean it (good news for all those who hate doing the dishes!). Just add a few drops of dish soap in warm water and blend your dishwashing worries away.

For consumer safety, it is BPA-free and made of strong hardened plastic called Tritan, which is great for blending hot soup without health hazards.

More than a Blender

For such an eye-watering price tag, you won’t just get a simple blender, of course. The Vitamix 7500 blender also lets you buy a dry blade container. This one does the dough-kneading part of the job and allows you to make flours and other dry goods.

However, if you’re not going to be working with dry stuff, the wet container that comes with the package is good enough.

You can use it to make butter with nuts, grind grains, puree stuff, chop up veggies using the pulse feature – the possibilities are endless. And it’s not just savory stuff – you can even make desserts like ice cream, snowcones, and whatnot with the high-speed, razor-sharp blades.

Okay, calling this blender quiet is kind of a stretch. It creates a considerable level of noise and is not suitable for blending smoothies in the early morning when your roommates are fast asleep.

However, considering the 2.2 horsepower motor and the crazy fast-spinning blades, the blender makes less noise than what is expected. Hence, it’s no different than your regular blender when it comes to noise.

The kind of warranty Vitamix offers speaks for the brand itself. The 7-year warranty covers every kind of damage and malfunctioning that could occur, so the eye-watering price tag is worthwhile after all.

One thing that worries a lot of people when using blenders is overheating. And with a high-powered motor like that of the Vitamix blender 7500, the risk of overheating is very real.

To counter this issue, the base unit has a radial cooling fan inside so you can blend those fruits and veggies into the silkiest puree. And in case you do go over the top, the machine will shut off automatically to prevent overheating and damage.

Reasons to Buy the Vitamix 7500 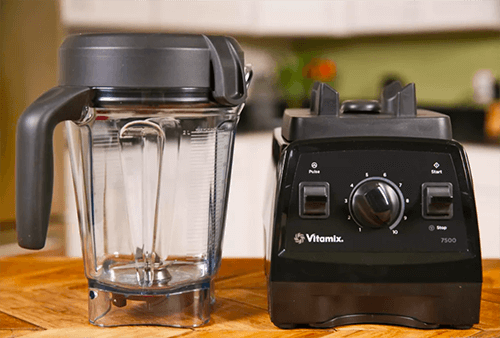 Below are all the reasons you should invest in this mighty, expensive, and powerful blender:

Reasons to Avoid the Vitamix 7500

As with everything, there are some definite downsides to the 7500:

Is purchasing the dry container necessary?

Depends on what you want to make. If you’re going to work with flours and nuts, you may as well spend on a dry container to make full use of your blender. If not, then you don’t have to worry about purchasing any accessories.

The only difference worth noting between these models is the presets and the price. The 750 comes with 5 presets that include different modes and blending speeds.

For this feature, you’ll have to pay a bit more, but it could prove worth it for those who don’t enjoy the simplicity of the 7500.

It sure can, as blending ingredients at high speed for 5-7 minutes will result in warmed-up liquids.

Loud enough to wake up anyone in the neighboring room, but not enough to disturb your neighbors. To be precise, the noise measures 70 decibels, which is as loud as a small power tool.

If you’re having a hard time deciding between these two models, then you just need to consider three things: price, power, and height.

Other differences worth noting are that the 5200 has the taller, 13.4 inches pitcher and is somewhat louder than the Vitamix 7500 blender. It also lacks the pulse feature and the cooling fan.

Other than this, they’re pretty similar. They have 10 variable speeds, a 64 oz pitcher, a 7-year warranty, and the same minimalistic design.

Would we recommend buying the Vitamix 7500 blender? If you use your blender for a lot of cooking tasks almost every day, then yes, but if you just want smoothies and shakes out of it, No. If what you’re looking for is reliability, durability, and versatility, then there’s nothing better than this blending beast.

It’ll keep grinding, blending, and pureeing relentlessly and won’t give up on you anytime soon. And even if it fails, the 7-year warranty on the Vitamix blender 7500 has got your back.