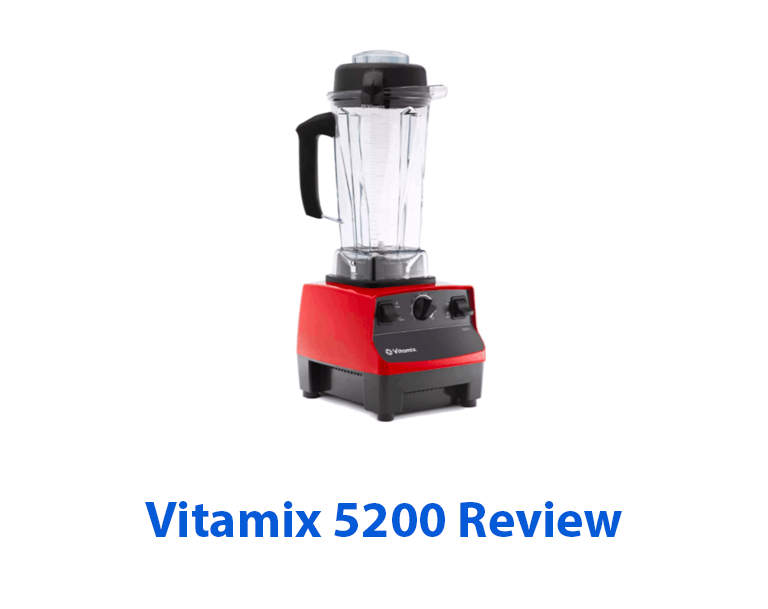 If you’re a food fanatic or a chef who loves to try new recipes every day, you’d know that a regular kitchen blender is never enough. You want something reliable and remarkable – something that can blend, crush, and grind various stuff in the same container.

The Vitamix 5200 is one blender that ticks all those boxes. In fact, it’s the leader of the pack when it comes to reliable and strong blenders.
So in this post, we’ll thoroughly review the 5200.

What are its features, and how well does it perform in the kitchen? Why is it a good investment for some but not so great for others? How does it compare with other Vitamix models, and is it even worth it?

Please find out the answers to those questions in our detailed review below.

Vitamix – a Name You Can Trust

For decades, Vitamix has been providing consumers and businesses with high-end, premium-quality blenders. The family-owned company began back in 1921, but 1949 was when Vitamix really took off after it aired an infomercial on TV.

Since then, millions of people have loved the extra-durable, beastly blenders that can blend just about anything in sight. Reviewed and appreciated by some of the top magazines of the US, Vitamix continues to impress with its impeccable and reliable blenders to this day. 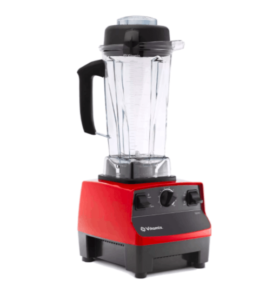 Even though the 5200 is an older model, it still has all the specs necessary to impress a kitchen gadget nerd. Here’s our detailed, critical review of some of its best features:

So here’s a big deal about Vitamix blenders: they’ve got crazy powerful motors. They’re not like your standard blender that struggles with veggies – they’ll chop and blend the meanest and toughest of fruits and veggies in a blink of an eye.

The same goes for the Vitamix 5200 blender. It has a 2.0 horsepower motor that allows its blades to spin at a whopping 37000 rpm (rotations per minute). That’s truly unmatched power, as you’ll be hard-pressed to find a blender that can beat that.

Smoothies, sauces, dips, pureed veggies – the Vitamix 5200 can handle all of it. In fact, because its blades spin at a lightning-fast rate, it can turn cold soup into hot soup. The friction heat created by blending at top speed for around five minutes makes this possible. Pretty cool, huh?

A powerful motor is not enough on its own – the Vitamix 5200 also has one of the most impressive blades in blender history. They’re made of hardened, aircraft-grade stainless steel and are razor-sharp – almost like a Japanese Katana sword.

With the ability to blend tough stuff like pumpkin and carrots, you’ll be surprised at how quickly you can make soups and purees, all thanks to the 37000 rpm of these sharp blades.

Not just that, but the 5200, like other Vitamix models, excels at blending leafy greens. No more weird, icky bits of kale in your smoothie – with the 5200, you can enjoy Planet Smoothie kind of drinks at home.

The only thing we didn’t like about the stainless steel blades was that you couldn’t exactly remove them. Since they’re fixed, it can be difficult and, frankly, a bit dangerous to wash the container with your hands.

There are two switches and a variable speed control dial on the base unit, and that’s about it.

The toggle on the left allows you to switch between high speed and variable speed. The high-speed mode is the fastest the Vitamix 5200 blender can spin its blades, while the variable speed mode lets you select the speed from one to ten. There’s also an on/off switch at the right.

Since you have many speeds to choose from, you can blend different stuff into different textures and consistencies. For instance, the high-speed mode is great for crushing ice and making snow cones, while the lower speeds are for salsas and chunky sauces.

On the other hand, not having preset settings and manually choosing the speed isn’t ideal for a busy kitchen.

Either way, you’ll be impressed by the variety of textures these ten speeds can produce. Just make sure you begin with the lowest speed and move on to the higher numbers after a few seconds.

At first sight, the container on this model looks a bit intimidating. It stands 20 inches tall – something tiny cabinet owners won’t appreciate. Without the lid, it’s about 17 inches.

However, the best thing about it is that it’s a 64-ounce container, which means you can make a huge batch of smoothies (or tequila cocktails – we’re not judging) in one go.

But if you want a smaller quantity, the tall, tapered shape of the container makes it possible to do so without stuff getting stuck at the bottom.

Plus, the 64 oz container is made of BPA-free Tritan (which is plastic). This kind of material is approved for use in kitchen appliances, preventing any hazardous consequences.

Many people get paranoid that their blenders might overheat, and sometimes, it does happen after prolonged use. For this reason, the Vitamix 5200 blender has a radial cooling fan.

So when you’re running a high-power motor like that of the Vitamix 5200, the fan cooling action will prevent overheating.

But let’s say you went way over the top, and the radial fan can’t help anymore. At this point, the thermal protection system will kick in and automatically shut off the machine to prevent motor damage.

Versatility at its Best

Since Vitamix blenders aren’t the cheapest, so naturally, you’d want more than just smoothies and sauces from it.

This is why you have the option of purchasing a dry blade container with it. These blades are built to grind like a boss.

Be it dry grains, rice, nuts, and the toughest ingredients in your cabinets – the dry blade can handle it all. You can even knead the dough with it – how cool is that? But if you’re not planning to deal with any grain or flours, then you need not buy a dry blade.

Meanwhile, the wet blade (which comes with the package) can handle all your drinks, sauces, baby food, and more.
Either way, the Vitamix puts on a stunning show of versatility with its powerful performance, making every penny worth it.

Reasons to Buy the Vitamix 5200 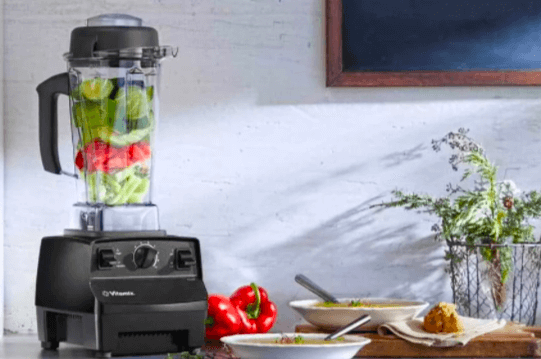 Here’s why we think this blender is a good investment:
• The Vitamix 5200 offers consistent performance, and that’s a fact. You can rest assured that your blender will grind, chop, blend, and puree relentlessly for years to come. Just make sure you follow the instructions given, and you’re good to go.

• Its 2.0 HP motor is one of the most powerful you’ll find on the market. All of you who have endured chunks and lumps in your sauces and purees will be able to appreciate its powerful performance.

• The blender gives you complete control over the texture of your food with its ten variable speeds. Use the lower speeds for chopping and higher ones for making the silkiest smoothies.

• It’s cheaper than other models while having all the necessary features to make it work like magic.

• It offers a 7-year warranty, making the pricey blender worth the bucks.

• Offers a 6-feet long retractable power cord for ease of use.

• Has a tamper to help with blending stubborn ingredients.

• It comes with a DVD guide to help you get started and provide information about proper usage.

Reasons to Avoid It

• High-performance blenders from Vitamix are notorious for being costly, and the 5200 is no exception. So be ready for a lighter wallet after you purchase this bad boy.

• Unlike its successor, this model is quite loud with its crazy fast-spinning blades and powerful motor. The noise level measures to be around 90 decibels, which is enough to keep you from having a conversation in the kitchen.

• The controls on this thing are way too simple, especially considering the price tag. There’s no pulse toggle, nor any presets.

• It’s not dishwasher-safe, despite being a high-end blender.

Here’s some more information you might need before making your decision:

The 5200 was released back in 2007, yet it remains to be a kitchen gadget sensation to this day. This is mainly because of its slightly affordable price while retaining most of the perks of the expensive models.

Do Vitamix blades get dull?

No, they don’t. These blades are meant to last for years, even if you use them to crush hard stuff like ice now and then.

Yes! The 5200 is pretty good at vanishing all sorts of seeds, though you’re still going to find a small bit of residue when straining. These are mostly very tiny seeds that are too small for the blade to catch.

The Vitamix 5200 is self-cleaning – add a few drops of dish soap and some water in the container and blend at high speed. It’s doubtful that you’ll need to hand-wash the insides after this.

Does Vitamix ever go on sale?

This is the question you’ve all been waiting for, haven’t you? Well, good news – Vitamix does go on sale occasionally, especially on Black Friday.
You’ll find most of these discounts online (usually on Amazon), so don’t forget to scour the internet for the occasional but oh-so-sweet sale.

There are a few small but noticeable differences between the Vitamix 5200 vs. 5300. The 5300 is an upgraded version of its predecessor, with a 2.2 HP motor. Moreover, it has a slightly shorter but wider container, making it easy to store. It still has a capacity of 64 oz, though.

The 5300 also has a pulse toggle, which the 5200 lacks. However, the real deal-breaker here is the price. The newer Vitamix model costs considerably more than the 5200, and this, for most people, is a no-no.

The rest of the features – speed, durability, sharp blades, and all – are pretty much the same.

When comparing the Vitamix 5200 vs. 7500, there are, once again, just a few differences. First off, the 7500’s container is about three inches shorter and wider than the 5200’s humungous container.

The 7500 is also much quieter than the 5200 and comes with a useful cookbook with tons of recipes. For these small improvements, you’ll have to shell out many more bucks for the 7500 than for the 5200.

Honestly? It depends on what you intend to use it for. If you’re just into making smoothies and exotic dips, then you should look for a more affordable blender that can perform almost as well as the Vitamix 5200.

But if you want a premium, highly durable blender that’s versatile enough to make nut butter, knead doughs, and grind the hardest of seeds – then yes. It’s definitely worth the big price tag, especially if you’re a food enthusiast and a kitchen gearhead.