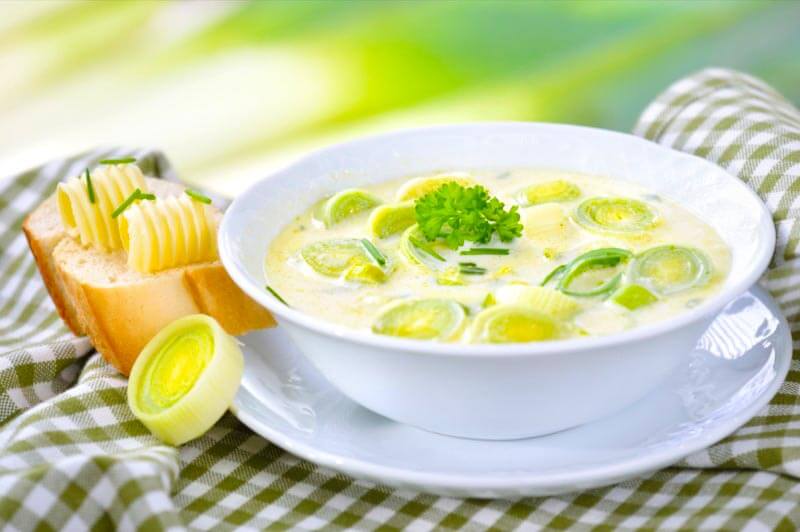 Although uncommon, yet, a very fancy dish that is usually served besides the main dish in a Christmas dinner, is the Creamed leeks. That’s why some people often wonder whether or not it is possible to freeze this delicious side dish.

Theoretically speaking, you can freeze creamed leeks. However, you have to put some things in mind if you are planning to do so. Creamy sauce can be affected by the freezing process and it might end up cracking and losing its unique texture. But, you can still save it by making the leeks with white sauce instead of just cream. Which holds its texture more when frozen. All you will need to do when you are reheating it is to add a bit of milk and mix it well. This should give you the same creamy texture it had before being frozen.

What are creamed leeks?

‘cheesy leek bake’ or ‘leeks au gratin’ is basically this fancy and heavenly side dish that is made of chopped or sliced cooked leeks with an amazing creamy sauce and a sprinkle of cheese on top, resulting into a creamy, cheesy, and fulfilling side dish!

How to make creamed leeks?

Well, there isn’t any specific recipe for this dish. You can either start by making the white sauce first by adding the milk to the roux and making the white sauce that will go over the sautéed leeks. Or you can just go ahead and add everything together, including the leeks and the cream in a pan and mix them together till the sauce thickens up. Once it does, you will just add a handful of cheese on top and bake it till it gains the signature golden brown color!

Remember, you can cut the leeks however you want. It won’t affect the freezing process.

How to freeze creamed leeks?

Before I go on with the detailed steps of freezing the creamed leeks. You have to consider whether you are planning to make this side dish ahead of time and freeze it for later, or whether you are going to just freeze any leftovers after a meal.

If you are going with the prior, then avoid adding the cheese on top, as it might affect the sauce while it is reheating after freezing.

On the other hand, if you are going to freeze leftovers, then don’t worry too much, it will taste as good as the freshly prepared dish!

Another alternative for freezing creamed leeks, which I think is the safest one, is freezing the fried in butter leeks separately from the cream and mixing in a freshly made cream once the frozen leeks defrost.

Can you freeze cheesy leeks?

Yes. Same with the creamy leeks.
Fun fact. They are both the same thing!

How long can it last in the freezer?

Creamed leeks can stay for up to 6 months in the freezer, and even longer, but with a slightly diminished quality!

How to defrost creamed leeks?

Just transfer the container with the creamed leeks from the freezer to the fridge and allow it to thaw overnight.

How to reheat creamed leeks?

I know you might have heard about many ways to reheat leftover or frozen creamed leeks, but I am going to share with you what I think is the best one. Which is reheating your defrosted creamed leeks inside a pan on the stovetop. This helps incorporating the components of the sauce together, returning it to its original form. Once the sauce is back to its creamy texture, sprinkle some cheese and transfer the creamed leeks to the oven for the cheese to melt and acquire the amazing golden color. The oven grill should do the trick as well.

The microwave and oven are also available. However, they might not give you the same results!

Can You Freeze Duck Fat?

Can You Freeze A Roast Dinner?

Can You Freeze Gorgonzola Cheese?