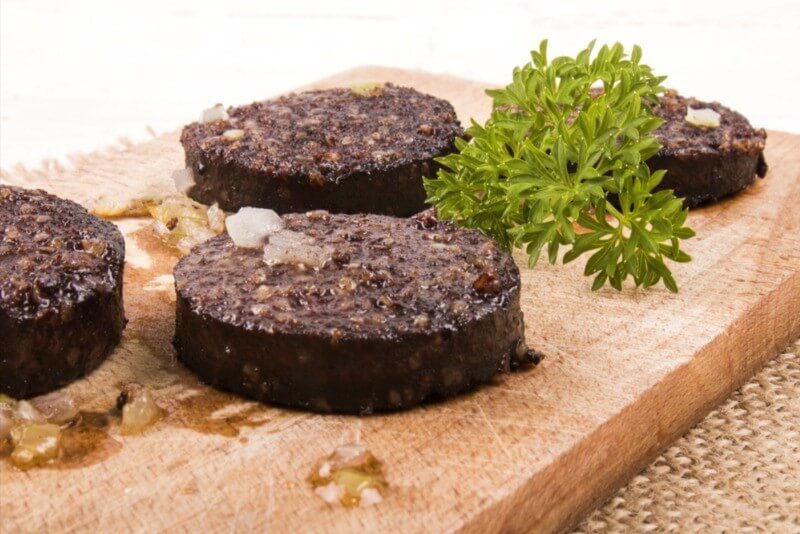 Can I freeze black pudding? Yes. You, absolutely, can freeze Black pudding easily and efficiently. All you need to do is to just place your packages, of either sliced, or whole sausages in the freezer. Just like that.

Keep in mind, though, that you shouldn’t cook your sausages prior to freezing them. They are usually already cooked at the shop, butchers or deli you bought them from. Also, I wouldn’t recommend refreezing Black Puddings that were already frozen before.

What is black pudding?

For all the food enthusiasts that aren’t familiar with the infamous British black pudding, know that it is a unique blood sausage made of pigs blood, pig fat or beef suet, with some extra ingredients like cereal, oats and seasonings.

As you can see the Brits made sure to use every inch of the pig so that no food goes to waste. I truly thank them for that!

How to freeze black pudding

Before we go on with the step-by-step guide to freezing Black Pudding. Allow me to first throw in some helpful tips. It is always better to freeze sliced black pudding than whole ones as they are easier to defrost and take less time.

Also, that way you get to control the portion you need to defrost instead of thawing the whole frozen sausage and not knowing what to do with the leftovers.

How long can frozen Black pudding last in the freezer?

I would recommend only leaving them in the freezer for no longer than 4 months. Although they will be safe to eat after this period of time, yet, they won’t have the same premium quality as the freshly bought ones.

How to defrost Black pudding

Simply, transfer the frozen black pudding from the freezer to the fridge and allow them to slowly defrost overnight on the top shelf. Black pudding slices should take less time to defrost than the whole ones.

Can you freeze cooked black pudding?

If it is a question of whether you can generally freeze cooked black puddings.

Then, yes. You can. However, I don’t entirely recommend it, as you will probably lose the signature crispy exterior and moist and juicy interior of the cooked sausages by cooking, then freezing and cooking them again.

Can you freeze a whole black pudding sausage?

Yes, definitely. But you have to keep in mind that they take a lot longer to defrost than the sliced Black pudding. In addition to the fact that you can’t really refreeze them again. That’s why you have to be sure that you will cook the whole black pudding sausages that you defrosted.

Can you cook Black pudding from frozen?

The good news is that, yes. You can cook Black pudding from frozen. In fact, you have two ways to do so. Either deep frying them straight from the freezer, or cook them in the oven.

I got to warn you, though, cooking them in the oven can take a long time till they reach the desired temperature, which is at least 75C.

Can You Freeze Baileys Irish Cream?

Can You Freeze A Sponge Cake?

Can You Freeze Bread Pudding?