Let’s be honest: nobody wants to cook dinner after a long day at work. Ordering some Chinese takeout seems like the best option, despite the guilt creeping up inside you about not eating healthy.

But there are ways to have healthy homemade food even on such days – you just need to own the right gadgets.

One such kitchen asset is a pressure cooker, of course. Just drop all the stuff in the pot, set the timer, and voilà! You’re making your favorite recipes at home, without any fuss, in half the usual cooking time.

We’ll talk about the Crock Pot Express cooker’s features, the pros and cons of owning it, and lots more. Keep reading!

What CrockPot is All About – An Overview

For over 40 years, CrockPot has been inspiring home cooks and chefs to turn their culinary dreams into reality. With a range of different slow cookers and pressure cookers, CrockPot is a name trusted nationwide for its impeccable quality and reliable performance.

It was initiated when a young man called Irving Naxon had a stroke of brilliance. After his Jewish mother narrated stories to him about a bean stew that was cooked over 24 hours during Sabbath, he came up with the first-ever model of a slow cooker.

His device got so popular that by the 1970s, he sold his brand to Rival Manufacturers, who rebranded the entire thing. Today, millions of people use the trusted CrockPot to stew up flavorful meals – all thanks to Naxon’s dear old mother who loved beans!

Here’s our take on how the Crock Pot Express cooker performs in the kitchen with its nifty features and design:

Right out of the box, the Crock Pot Express isn’t exactly a stunner. It has the usual shiny stainless steel exterior with a black lid and control panel. While it may not be winning any appliance beauty pageants, the minimalist design is actually a plus.

The simply-labeled controls and a big wide display make it easier to operate the device amid all the cooking fuss. No crazy symbols or colors – just black and white for your convenience.

Apart from this, the lid has clear markings to indicate where the steam and power valves are. The power cord, on the other hand, seems to be a bit short for our liking.

Truly a Multi-Cooker with 8 Functions

One of the frustrating realities of home cooking is the mound of pots and pans waiting for you to clean them.

This pressure cooker solves that problem for procrastinators like us. With eight different modes, you can now perform an array of cooking functions with just one pot.

Firstly, the Crock Pot pressure cooker can pressure cook stuff like a champ. Your favorite meals will pop out in a third of the usual cooking time traditional methods take.

Second, this device can also slow cook, sear, saute, simmer, boil, sterilize, and steam stuff when you want it to. So when you’ve finished braising those short ribs, you can cook your favorite sauce in the same pot using the saute option. Easy and delish!

Just turn the steam release valve, and the pot will release all the pressure from the opposite side of the lid.

Note: you will still have to be careful of staying away from the vertical gush of steam.

The temperature and time for steaming and other functions are preset, so you don’t have to manually enter them. Not just this, but you can also select what you’re cooking and the device will automatically set the time and temperature needed to cook that food.

For instance, if you select beans/chili, the cooker will cook the stuff for just the right amount of time and let you know when it’s done – all with just a one-touch action.

If you’re unnerved by the fact that you can’t look through the opaque lid, the status bar just below the big digital display will keep you informed. It displays in a bright blue LED light how much it has pressurized.

Delay Timer to the Rescue

Not going to be home in time to cook the food? Just drop all the ingredients into the pot before you leave, and set the timer to start cooking at a specific time of the day.

This way, your CrockPot will start cooking while you’re away and have it ready in time. Talk about being smart!

Keeps Your Food Warm with Auto-warm

This Crock Pot pressure cooker goes into a warm setting called auto-warm mode as soon as the cooking process ends. This way, you can have a steaming plate of food whenever you’re ready to eat.

Just be sure not to leave your Crock Pot Express on for too long, or the food might get burned.

Here’s why we think it’s worth buying:

Reasons to Dislike it

Below are some cons of the Crock Pot pressure cooker, which aren’t exactly dealbreakers, but worth considering: 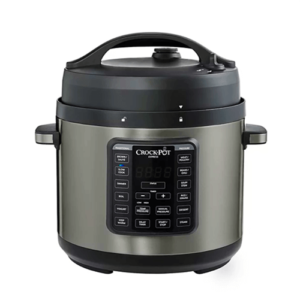 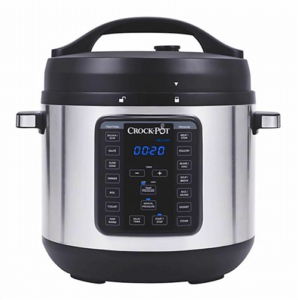 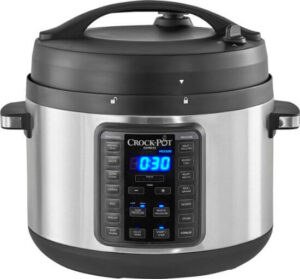 When compared with other cookers in the same price range, the Crock Pot Express stands out as an affordable device that is fully functional and works as well as any cooker.

Yes, it may not be a life-changing, insanely impressive gadget – it definitely has downsides. For instance, apart from the cons we discussed above, sometimes its electronic controls may go haywire and you’ll have to refer to its manual to get it back on track.

But hey, considering the price and its multitude of functions, we’re not complaining, as it certainly gets the job done 99% of the time.

In a nutshell, the Crock Pot Express is ideal for those who don’t want to spend a ton on gadgets but want that melting-in-the-mouth kind of tender meat ASAP.